Contemporary art in a nineteenth-century museum? Discover the grandeur and tempestuousness of the ocean at ‘The Sensation of the Sea. In honour of Bas Jan Ader’. The exhibition was on display from 14 September 2018 until 6 January 2019.

For The Sensation of the Sea, guest curator Joanna De Vos has invited several international artists to engage in a dialogue with The Mesdag Collection. These contemporary artists are captivated by the grandeur and tempestuousness of the ocean. The attraction of the sea is an inexhaustible source of inspiration for them, a ‘battery for the imagination’.

Odes to the performance In Search of the Miraculous by the Dutch artist Bas Jan Ader form the exhibition’s connecting thread. Ader disappeared in 1975 as he attempted to sail across the Atlantic. His soul became one with the untameable power of the sea. The tributes to Ader’s artistic practice highlight the enticement and mystery of the ocean.

Discover how the contemporary artworks integrate into our nineteenth-century museum and prepare yourself for a series of surprising and special ‘encounters’. The artworks of these artists were on display in The Sensation of the Sea:

This exhibition is generously supported by: 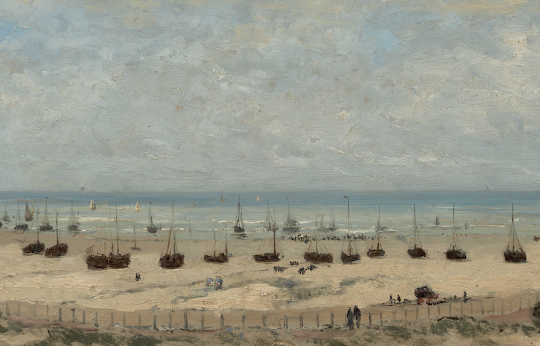 View his ‘Study for Panorama of Scheveningen’