Why did Dutch artists travel to the French village of Barbizon? And once there, how were they inspired by the French artists? The exhibition ‘The Dutch in Barbizon. Maris, Mauve, Weissenbruch’ was on display until 7 January 2018.

The Dutch in Barbizon recounted the story of Dutch artists (primarily) from the Hague School, who travelled to the area around the village of Barbizon in France. This exhibition was dedicated to the Dutch response to the renowned Barbizon School.

From the mid-19th century, Barbizon School paintings gained popularity in the Netherlands. They were put on display at exhibitions, and collectors acquired the works. Hendrik Willem Mesdag put together the most significant collection and from 1887, Dutch artists also had the opportunity to get better acquainted with the works of these French artists at Museum Mesdag.

Dutch artists including Jacob Maris, Jozef Israëls and Jan Hendrik Weissenbruch travelled to Barbizon to paint the French landscape. This fresh appreciation of the unspoilt landscape also encouraged artists in the Netherlands to search for picturesque locations to paint.

Artists headed out of the city and explored their natural surroundings. The dunes, lakes, forests and moorland all became cherished subjects of Dutch artists. They drew inspiration from the work of prominent French artists such as Charles-François Daubigny and Jean-François Millet.

The Dutch in Barbizon invited visitors to discover the work of these Dutch artists and to see first-hand how they were inspired by the French masters.

The Dutch in Barbizon was a sub-theme of The Dutch in Paris, 1789-1914, a major exhibition at the Van Gogh Museum. Both exhibitions were part of the ‘Van Gogh & La France in 2017’ programme.

The exhibition was organized in collaboration with the Netherlands Institute for Art History (RKD) and the Petit Palais in Paris. 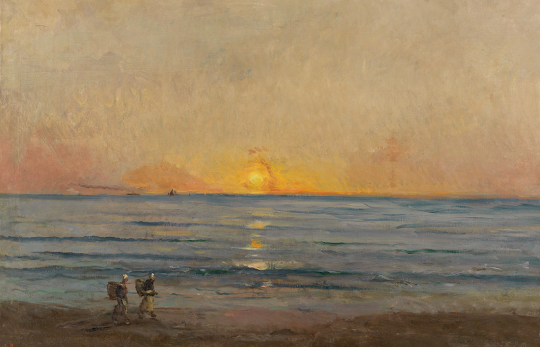 Who were these French artists? Read the story 'The Barbizon Painters'