The exhibition ‘Paintbrush Princesses II. Painting as a Profession’ was on display at the Mesdag Collection in The Hague from 30 May to 26 August 2012.

Approximately 40 paintings, miniatures and sculptures by 19th-century female artists were on display in the former residence of Sientje Mesdag-van Houten. In addition to works by Sientje Mesdag herself, the exhibition also featured work by her female contemporaries including Thérèse Schwartze, Henriette Ronner-Knip and Suze Robertson. These women were amongst the first generation to have the opportunity to establish professional careers as artists.

These female artists were leading figures in the Dutch art world of the period. Sientje Mesdag, who was married to celebrated Hague School artist Hendrik Willem Mesdag, became an avid collector and artist in her own right, while fervently supporting her fellow female artists.

In addition to works from the Mesdag Collection, the exhibition also featured works loaned from museums including Museum Boijmans Van Beuningen and the Rijksmuseum. Paintbrush Princesses II also included numerous works held in private collections. One of the highlights of the exhibition was the self-portrait by Thérèse Schwartze (1851-1918), which she painted for the renowned portrait collection of the Uffizi Gallery in Florence. This particular work last went on display in the Netherlands 100 years previously.

In the 19th century, there were more than 1,100 female artists in the Netherlands. Alongside ladies who viewed their artistic pursuits exclusively as a hobby, a growing number of women took up painting as a profession.

Up until 1850, it was primarily women from artist’s families who proved successful in carving out independent careers as artists. Artists such as Elisabeth Kiers-Haanen, Francina Louise Schot and Henriëtte Geertruida Knip specialised in painting portrait miniatures, small still lifes and genre paintings. As educational opportunities gradually improved in the second half of the century and art academies opened their doors to female students, the number of professional female artists in the Netherlands increased.

It would not be long before it became impossible to imagine the art world without them. Thérèse Schwartze, Henriëtte Geertruida Knip and numerous other women displayed their work in the Netherlands and overseas, and sold their work to collectors and art traders. They became members of artist’s societies such as Arti et Amicitae in Amsterdam and made their entrance into the professional art scene.

The collection of artist husband and wife Hendrik Willem and Sientje Mesdag, now known as the Mesdag Collection, contains a striking number of works by female artists.

Sientje spent years tirelessly supporting talented young female artists, in whose work the art collectors and dealers of the day took little interest. Alongside acquiring work by established artists with whom she was acquainted, she also purchased work by female artists yet to make a name for themselves. For many young female artists, Sientje played a major role in helping them on their way to becoming independent professional artists.

Collaboration with Paleis Het Loo and the RKD

Both exhibitions were compiled by guest curator Hanna Klarenbeek and organised in collaboration with the Netherlands Institute for Art History (RKD). 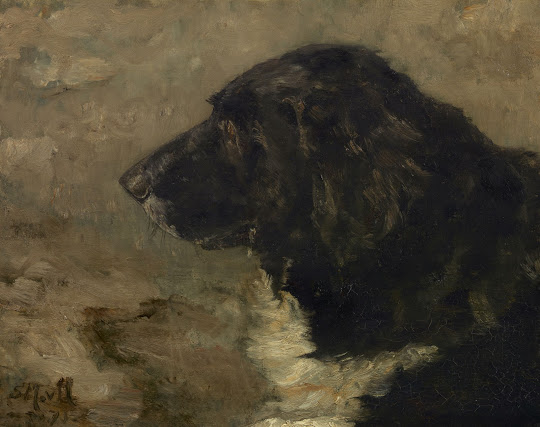 Such as Sientje's 'Head of a Dog: Nero'