Japonisme in The Hague? Discover Samurai swords, Satsuma vases and much more from Hendrik Willem Mesdag’s collection of Japanese decorative art. The exhibition 'Mesdag & Japan: Collecting the Far East' was on display in spring 2018.

Around the time of opening his Mesdag Museum in 1887, the painter, art collector and businessman Hendrik Willem Mesdag assembled a collection of Japanese decorative art, ranging from Samurai swords to Satsuma vases. The exhibition Mesdag & Japan: Collecting the Far East examined how Mesdag came into contact with Japanese art in the 19th century, where and how he collected it and how Japonisme influenced art in The Hague.

Prior to 1854, the Netherlands was the only Western country permitted to trade with Japan. It also imported Japanese art and domestic goods. Japan opened its borders more widely in 1868, sparking a craze in the West for the country’s art. Mesdag responded to this unprecedented popularity by purchasing Japanese art objects to display at his Mesdag Museum (now The Mesdag Collection).

Inspiration from the Far East

As time went by, decorative art in The Hague also fell under the Japanese spell: ceramic production flourished and its technique and style were influenced by the Far East. Mesdag also collected this form of art, and even owned shares in Plateelbakkerij Rozenburg, a prestigious pottery.

Mesdag & Japan: Collecting the Far East displayed artworks and objects from throughout this period – both before and after 1868. Extraordinary ceramic bowls, bronze vases, swords, helmets and other weapons were placed in the context of their time, alongside historical documents.

Would you like to find out more about Mesdag's eclectic collection of Japanese artefacts? The exhibition was accompanied by a richly-illustrated publication, paying homage to Hendrik Willem Mesdag and his outstanding collection of Japanese applied art. The catalogue is available in the museum shop and in the Van Gogh Museum webstore.

Mesdag & Japan ran alongside Van Gogh & Japan at the Van Gogh Museum in Amsterdam. Both exhibitions highlighted the influence of Japan and the popularity of Japonisme in 19th-century art. The Van Gogh Museum assumed management of The Mesdag Collection in 1990.

This exhibition was generously supported by: 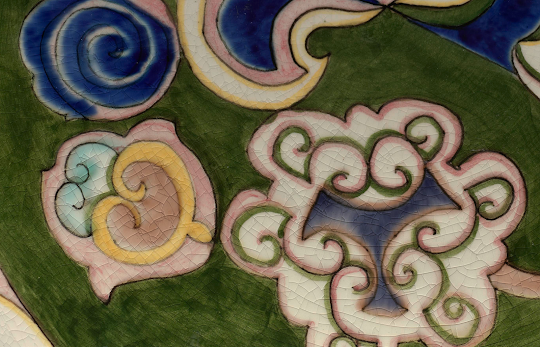 Decorative art in The Hague under the Japanese spell