The Italian artist Antonio Mancini (1852-1930) was so far ahead of his time that his paintings astonished the public. He was in favour with members of the international high society, who clamoured to have their portraits painted by him.

One of Mancini’s admirers was Hendrik Willem Mesdag, a painter and collector from The Hague. Over the course of 20 years, Mesdag shipped some 150 works by Mancini to the Netherlands – not only for himself, but also to exhibit and sell on. Mancini: Eccentric & Extravagant uses Mancini’s paintings of Italian circus boys, magnificent portraits and unique letters (from a recent private gift to the Van Gogh Museum) to offer a fascinating overview of the artist’s turbulent life and work. A large number of paintings in the exhibition have never before been on public display in the Netherlands.

The poor son of a tailor, Antonio Mancini was admitted to the Istituto di Belle Arti, the Academy of Fine Arts in Naples, at the age of 12. Aged 18, he was already exhibiting in large group exhibitions in Italy and two years later, his work went on display for the first time at the Salon in Paris, Europe’s most important annual art exhibition. As a skilled figure painter, he quickly established an international network of aficionados, which gradually expanded to France, the Netherlands, England, Germany and even America. He was praised for his use of colour and his arresting renderings of the state of mind of his figures.

Mancini painted the high society in Rome, London and Dublin and by 1920, he had gained such renown that he had his own exhibition at the Venice Biennale. Nine years later, he was admitted to the prestigious Accademia d’Italia. To this day in Italy, Mancini is still considered as one of the most prominent painters of his time.

Mancini was a living legend. He incorporated shiny materials such as glass, metal, mirrors or pieces of empty paint tubes into some of his paintings. That was unprecedented. He also developed other striking techniques, which characterise his paintings. While painting, he often placed a frame with a grid of horizontally and vertically stretched threads in front of his model, and another identical grid on the canvas on his easel. This so-called graticola left a distinct criss-crossed pattern on the paint surface.

Mancini made fascinating self-portraits throughout his life. He sometimes painted himself as a serious artist, while on other occasions, he appears to be sticking his tongue out at the viewer.

It must have been quite a spectacle to see the artist at work. Eyewitnesses report how when painting a portrait, he chose a vantage point about four or five metres from his easel, which he carefully marked with a cross. From there he ran back and forth to the canvas with his palette to apply a few daubs of paint, swearing, laughing or muttering.

W.B. Yeats, who was captured in a flamboyant pastel by Mancini in 1907, wrote: ‘If only I had resembled the portrait of Manchini [sic], I would have defeated all my enemies here in Dublin’.

Hendrik Willem Mesdag (1831-1915) was a fervent collector of Mancini’s paintings, pastels and drawings. In 1876, he acquired his first painting by the Neapolitan artist – then only recently turned 24 years old and yet to make his name outside of Italy – from a Parisian gallery. This work was The Sick Child (1875) – to this day, one of the highlights of The Mesdag Collection. This was to mark the beginning of an enduring partnership.

Over the course of 20 years, Mancini sent Mesdag some 50 paintings and approximately 100 drawings and pastels, all commissioned by the Dutch collector. Mesdag kept hold of some of the works, but also organised (sales) exhibitions and sold works on. Remarkably, the two men never met in person.

Never before exhibited in the Netherlands

From 13 March to 28 June 2020, The Mesdag Collection in The Hague will explore Mancini’s life and work showing some 40 of his paintings, pastels, drawings and letters, including nine works from its own collection. The exhibition illuminates the world of Mesdag as Mancini’s patron in The Hague, that of Mancini in his simple studio in Rome and the international beau monde, whom Mancini painted in imposing country houses and city palaces.

Works including Self-Portrait with a Straw (c. 1880, private collection, courtesy of the Bottegantica Gallery, Milan), The Marquis del Grillo (1889, The National Gallery, London) and Portrait of Hugh Lane (1906, Dublin City Gallery The Hugh Lane) will be on public display in the Netherlands for the first time, as will two of the plates that Mancini painted as payment in restaurants when he was broke.

A unique addition to the exhibition are two letters by John Jacobson, a young Dutch artist who stayed with Mancini in Rome for several months in 1893 and recounted his experiences to Hendrik Willem and Sientje Mesdag. He describes Mancini’s remarkable working method and his temperamental character. Both letters were recently gifted to the Van Gogh Museum, owner of The Mesdag Collection. 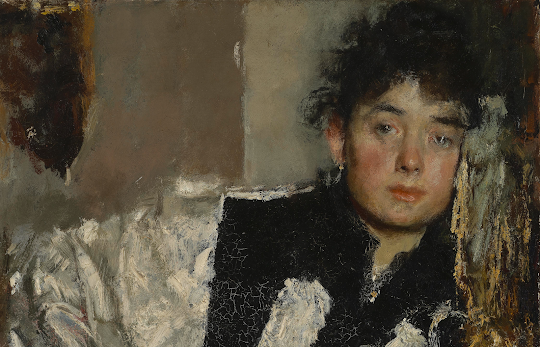